by Vladimir Kovacevic
AthletePath participates in several affiliate programs. If you click links on our website and make a purchase, we may earn a commision. Learn More

Mastering different types of tennis shots can make your game more diverse and allow you to surprise your opponent at any given time. In addition to the technique of the shots, it is also important to know when to use which type of shot.

In this article, we will discuss a few basic types of tennis shots, how you can learn to hit them, and when is the best time to use them.

The Most Common Types of Tennis Shots

It is important to remember that there are many different types of tennis shots that can be categorized by different parameters:

Hitting those tennis balls the right way is the foundation for any success in tennis, so let’s take a detailed look at some of these shots.

The most basic shot in tennis is the forehand, which is a type of groundstroke and it is usually the first stroke taught to beginners at the sport. The forehand is hit with the dominant (or preferred) hand, from low to high and with an over-the-shoulder follow-through. The key to a good forehand is to be well-prepared by getting into the open stance and to use your entire body to hit the ball, not just your arms.

Most players hit the forehand with one hand since the reach is better that way, although some players prefer to use both hands. For example, Monica Seles, Marion Bartoli and Peng Shuai come to mind among women. The two-handed forehand is even more rarely seen in men’s tennis – the most famous players to use it were Pancho Segura and Fabrice Santoro.

There are also different types of grip you can use to hit your forehands, such as the Western, the Eastern and the Continental. Of course, there are other grip types you can use but they are not that common. 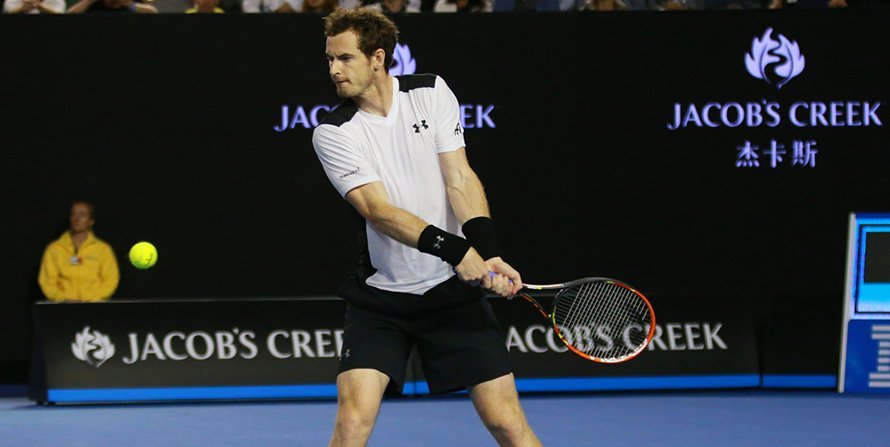 The backhand is the second most common shot used in tennis and it is another type of groundstroke. Basically, it is an opposite shot compared to the forehand – you use your non-dominant (or non-preferred) hand and you swing the racket away from your body. It is usually harder for new players to master than the forehand since most people don’t have a good feeling when hitting with a weaker hand.

Both backhand and forehand usually have topspin, which means brushing over the top of the tennis ball to create spin. However, they can also be used to hit other shots like slice, lob, or drop shot. Having a great tennis racket can also help you improve your game. After forehand and backhand as the two most basic shots in tennis, the serve is the next most important since it is a shot that starts every point. A good serve can bring you points directly by becoming an ace, or indirectly by setting you up for an easy winner.

During the game, a player is allowed to serve a second time if his first serve is faulty, which means that it doesn’t land diagonally in the designated area (service box). Of course, the first serve is usually much faster and stronger than the second one, which is more technical and less risky to avoid a double fault.

Serves are usually hit with a continental grip, and they can be flat, kick, or slice serves. 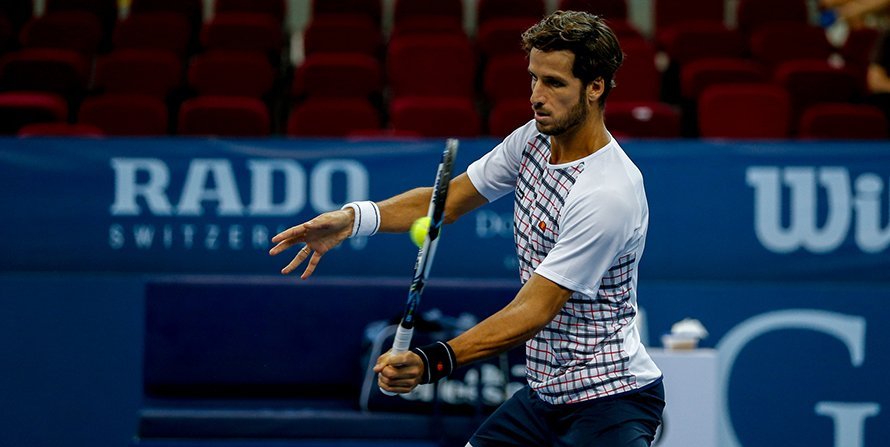 The volley is a type of shot in which you hit the ball before it bounces in your part of the court. This shot is usually performed at the net or in the half-court, unlike groundstrokes which are mostly hit from the baseline. However, volleys are also hit with a forehand or a backhand, except the ball is hit before instead of after it hits the court and bounces.

Volleys are aggressive shots, used in those situations when you are certain that you will win the point or at least set up a winning play by hitting them. However, volleys are highly technical and require a lot of skill and impeccable timing since they are hit a short distance from the net. Going to the net to hit a volley leaves you vulnerable to lobs and passing shots, so only use them if you are well-prepared for this threat.

Unlike the regular volley, the ball is supposed to bounce off the ground when you are hitting the half-volley. The goal is to hit the ball “on the rise” and it requires even more skill than the regular volley since you need compact movement, great positioning and perfect timing to execute it.

The half-volley is not a common shot since it is preferable to hit a volley or a full groundstroke but in some cases hitting the half-volley can be beneficial and lead to a quick point.

The overhead is not an often-used shot, but it can be quite important. Also, many players struggle with the overhead shot, even though it is among the easiest tennis shots in the technical sense. As the name suggests, the overhead means hitting the ball when it is over your head.

To master the overhead shot, you need to keep your eyes on the ball at all times. Get under the ball as soon as you can and bring your racket back to prepare for the swing. Remember to focus on hitting it precisely instead of hitting it as hard as you can. Also, balls that are too low should be hit with a high volley and the balls that go behind you should just be hit back in play. 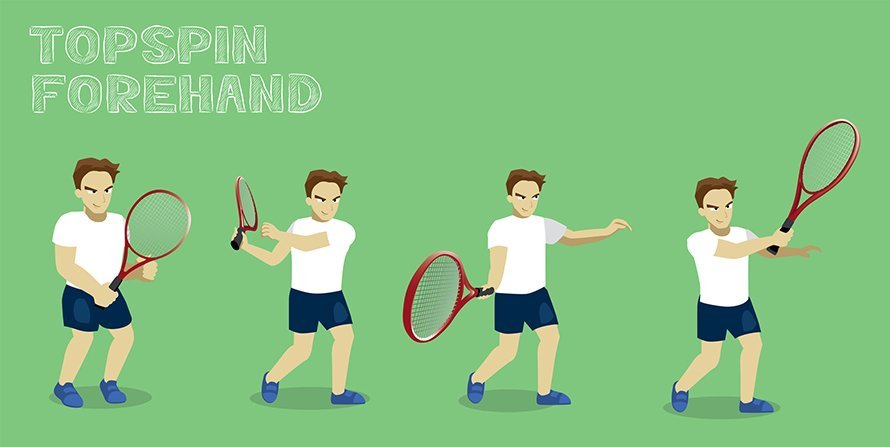 Topspin is a term that describes the forward rotation of a tennis ball while it is moving, or simply the type of spin that the ball has. However, this term is also used to describe a tennis shot that makes the ball move in such a manner. Topspin forces the ball to drop swiftly after going in an upward motion first. This allows you to hit the ball higher over the net and reduce the risk of making a mistake that might cost you a point.

In general, topspins are more effective on slow surfaces like clay and they are often used to attack the opponent’s backhand since it is physically harder to hit topspin balls with a backhand once they drop.

To execute a topspin shot, you need to keep your racket face slightly closed, while your swing should from low to high as you brush on the back of the ball. It is also important to extend the racket in a forward motion and to pronate your wrist to achieve maximum spin. Lastly, make sure that you follow through as you hit the ball.

The slice is a type of tennis shot that uses backspin or sidespin to make the tennis ball stay low after it bounces. It is a tricky shot to hit since you have to undercut the ball when you hit it.

The slice can be a useful weapon if you want to slow down the point or prepare to attack the net. However, this type of shot is often hit in desperation when a player only wants to keep the ball in the play. The slice is slow and it gives your opponent plenty of time to plan his next shot, so don’t overuse it and try to use it wisely.

The lob is a high-arching shot in which the ball hangs high in the air for a while. It is often used in defensive scenarios, such as when you get forced out of the field for chasing a ball. In some cases, your opponent may hit a powerful shot and you won’t have enough time to get ready to hit a proper shot, in which case you may simply use that power to lob him.

However, the lob can also be a great way to attack a player that comes to the net, especially when your opponent gets too close to the net.

That being said, a passing shot is a better solution in most cases and a much easier shot to hit. The lob requires a lot of skill and precision, at least when it comes to winning a point or setting up a winning play instead of simply keeping the ball in play.

The drop shot is a more advanced type of tennis shot that uses backspin to send the ball as close to the opponent’s side of the net as possible. This shot is hit from the baseline in most cases and it requires a lot of skill and control of the ball, or “touch.”

Additionally, the element of surprise is the key to a successful drop shot, which makes it more difficult to execute since many players can’t properly conceal their intention to hit the drop shot. The drop shot is basically a type of slice shot with some backspin or sidespin and little power.

Drop shots are supposed to be used when your opponent is too far from the net or when he finds himself off-balance during a rally. A bad drop shot will give your opponent plenty of time to sprint and retrieve the ball.

Mastering the different types of tennis shots takes time and effort, especially when it comes to some more advanced tennis shots.

If you are new to tennis, start with the forehand, the backhand and the serve, after which you will be ready to take on more difficult tennis shots.

Vladimir is a former journalism student and an active freelance writer. He has a lifelong passion for sports, especially soccer, basketball and tennis. His basketball playing days ended after high school but he still likes to play hoops with his friends. Vladimir also likes to ride his bike at some of the most popular green areas in Belgrade, Serbia.