Types of Tennis Serves You Should Master

Tennis is one of the most rewarding sports to play. However, it requires patience, a lot of practice, strengthening your body, and the sheer will to crush your opponent with as many aces as you can. This is where becoming a master at serving will always pay off.

It’s hard enough to keep up with the ball if you don’t have a lot of stamina, but mastering even the most basic of tennis serves can be a painstaking and challenging process. This article will focus on showing you a few of the main and highly beneficial tennis serves you will need to master considering that you’ve mastered the beginner serve altogether.

Learning and putting in a lot of practice for these types of tennis serves will definitely increase your tennis game. If mastered, they have the potential of allowing you to score more aces than when John Isner managed to hit 112 vs. Nicolas Mahut in a single match back in 2010.

Types of Serves You Need to Master 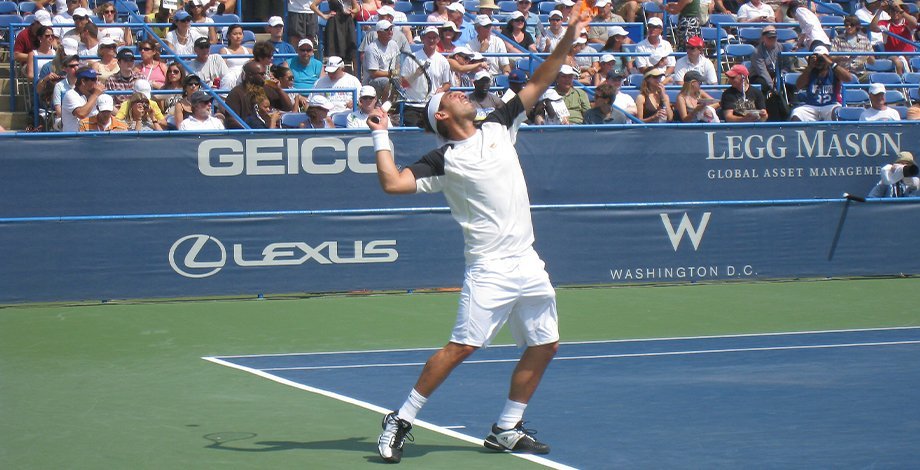 This type of serve is among the most powerful ones out there. Generally speaking, when you’re serving in tennis, you should attempt to hit an ace with the first serve. The flat serve has a huge potential of scoring an ace considering you do it perfectly.

The flat serve has minimal spin, meaning the ball will bounce off in a straight line from the direction it was coming from. The more power you apply to when you hit the ball, the less time your opponent will have to catch and return it. This goes for all types of serves, but with the flat, it’s easier to deliver more power as there is, as I mentioned, minimal spin.

Regarding how to do it, I could tell you that you need to toss the ball approximately 12-18 inches in front of you and 6.3 inches to the right, but nothing can compete with practice. So, find a good coach and practice the flat, and the other serves we’re about to have a look at.

Upsides of the Flat Serve

As I mentioned, the flat serve is among the most powerful. It’s highly rewarding, meaning this is one of the best serves that gets you an ace point. That’s mainly because of the amount of speed that you’re able to build up with it. There’s a lot of bounce thanks to the speed of the tennis ball, making it harder for the opponent to return it.

Downsides of the Flat Serve

Speaking of aces, it’s true that you can become unstoppable with it, however, one of the worst things about it is that it’s quite difficult to master. You might swing a few good ones, but it will take a lot of practice and error to be able to hit 9 out 10 serves perfectly.

Another thing you should look out for is if your opponent manages to somehow catch and swing the ball back at you. Because the serve allows it to travel so fast, it will come back just as fast, so you need to be quick. 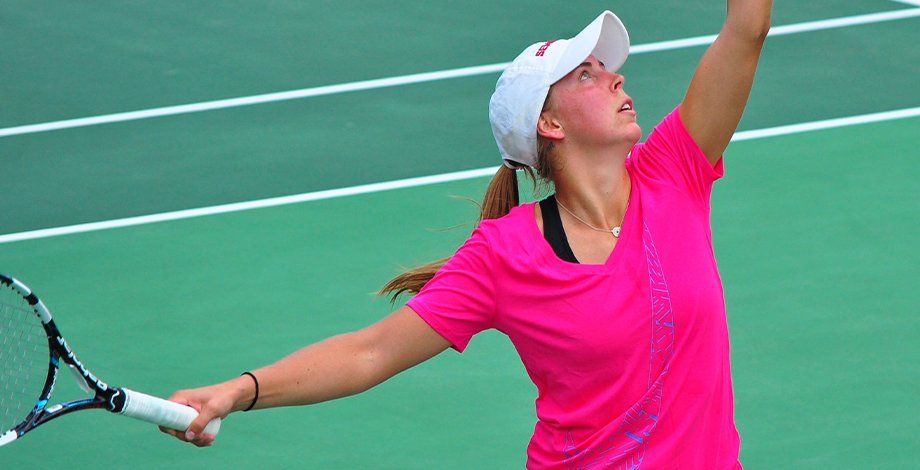 The slice is a serve that takes things to the next level. When you compare it to the flat serve, which goes straight with incredible speeds, the Slice is a much slower serve but with a twist, literally. When perfected, this serve is able to force the ball to stray from the direction it was hit and change course.

Usually, if you aim the ball to the right, it will spin to the left and continue going left after it bounces, forcing your opponent to predict this and attempt to act on time. The way you apply this twist is by hitting the ball differently, obviously. It’s usually performed with the Continental grip and can be a powerful weapon in your arsenal when mastered. Once you see how to apply the twist, the rest is all practice makes perfect.

Upsides of the Slice Serve

The slice can also be a powerful weapon when playing tennis, but for different reasons than the flat serve. We mentioned that this serve lacks speed, however, it allows you to confuse your opponent, leaving less time for them to react and return the ball.

When performing this correctly, you can force the court to open up by pulling your opponent out wide in the deuce or ad court, depending on whether you’re a lefty or righty. In doing so, you get a higher chance to move in and score if they return the ball.

Downsides of the Slice Serve

One of the first is the lack of speed, so pulling off an ace with this one could be less realistic. Also, the slice can often be predicted if you show off too much of it. If the opponent starts noticing when you’re about to go for a slice serve, it will get much easier to adapt and return the balls for them. 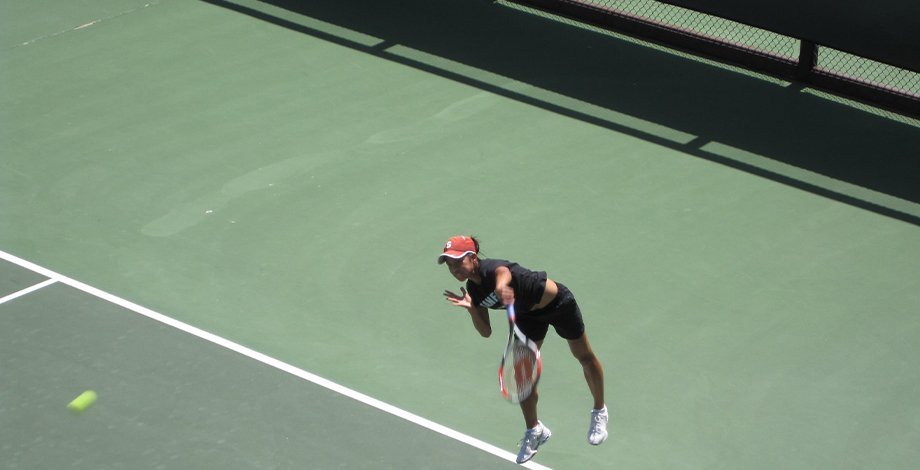 Finally, one of the most popular, powerful, and difficult tennis serves you can ever master. So, what does this type of serve accomplish? When you use the kick serve, you apply a lot of topspin to the tennis ball. This allows you to hit the ball with extreme force and still keep it within the court. Thanks to the topspin, the ball will hit the ground much harder than a flat serve would allow it to.

This, in turn, forces the ball to bounce high up, making it harder for your opponent to predict where it’s going to land and giving you more time to prepare for a return. The technique can be accomplished by brushing up on the ball as you serve, but don’t be fooled. It will take some time and a lot of practice to get the hang of it.

Upsides of the Kick

Believe it or not, the Kick serve makes it easier to land the ball in the service box, even with the increased amount of power you’re using. You can use this to your advantage when noticing that your opponent has a certain weakness. For example, if your opponent has a weak backhand, aim the ball to exploit this weakness and score yourself some points.

Downsides of the Kick

Even though the amount of power and control you get from using the kick is great, there is also a lot to risk. For instance, you will need to master the serve perfectly if you want to use it to your advantage. Otherwise, you will be offering your opponent some fairly easy returns.

Another disadvantage is the lack of speed. Speed and control don’t usually go together in these situations, but this is why it’s great to master all of these serves, as you can decide which one to use and when to use it. Being a master at all of these is a sure way to victory, once perfected, of course. Although, making sure your gear is top-notch is also important. This includes having a decent racket and great tennis strings for maximum efficiency. 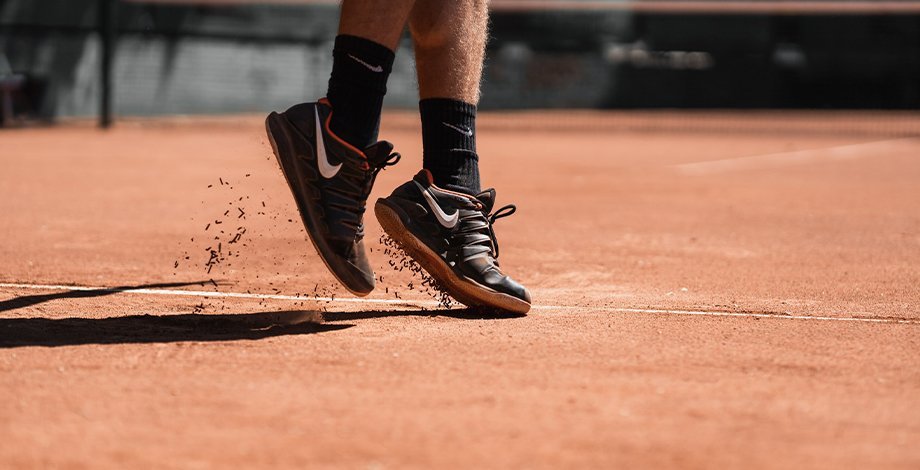 We hope that we were able to clear up a few things regarding tennis serves and their advantages and disadvantages. Each serve is powerful in certain situations. However, you will need to practice and perfect them if you want to increase your chances of becoming the best. Even though having some of the best tennis rackets out there will help your experience, it still comes down to how much you practice.

This article was more intended to help you learn about the possibilities each of them offers and their unique benefits. Now that you know when to use them and what you will be getting in return, go out there and practice to the max.

What to Wear Skiing & Snowboarding

Are you still debating about what to put on after looking out the window, checking three different weather forecasts and asking your mate (or your mom)? “What should I wear?” seems to be an age-old question that makes even the best of us uncertain from time to time – especially if there is some distance […]