by Stole Trishanski
AthletePath participates in several affiliate programs. If you click links on our website and make a purchase, we may earn a commision. Learn More

When playing tennis, there are several techniques regarding hitting the ball that you can use to your advantage. It’s not just about hitting the ball as hard as you can, as, without the proper technique, you will end up never smacking it way beyond the tennis court. The forehand grip allows a player to take better aim and use much more power when hitting the ball, hopefully scoring the winning points.

However, a forehand grip doesn’t only involve holding the racket with your dominant hand like you would hold a hammer. There’s much more to it. There are several different kinds of forehand grips, all offering different benefits. We will explore the Eastern, Semi-Western, and Western forehand grips, showing you what they bring to the table and how to employ them. But first, it’s crucial to understand what racket grip bevels are. 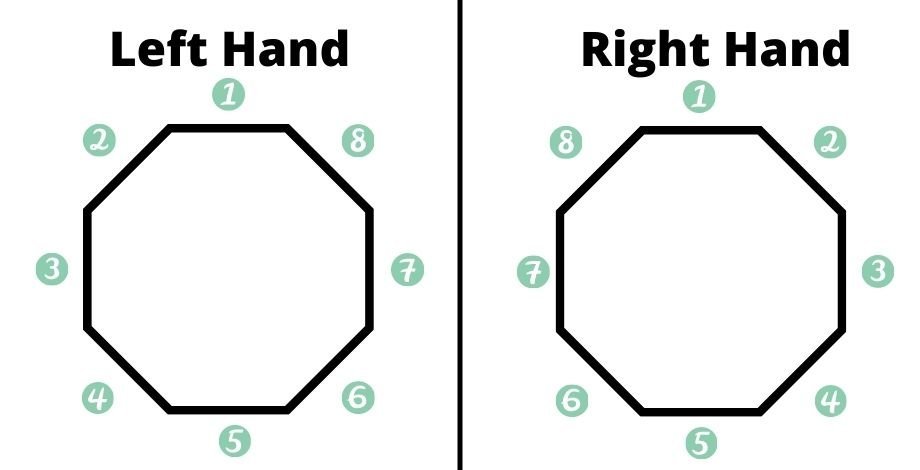 As you can see from the image, there are eight bevels when it comes to tennis rackets. These bevels will make it easier for you to understand how to properly hold the racket in the various grips. Simply position each part of your palm in the way that the explanations below instruct you and you will have the proper positioning for each type of forehand grip. Now, let’s learn the grips. 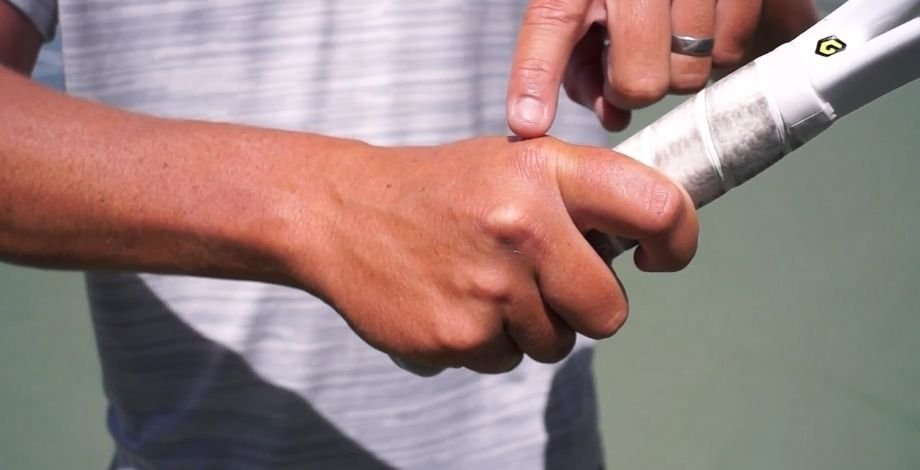 How to Use the Eastern Forehand Grip?

Here is where the racket grip bevels we talked about come in handy. Let’s look at what you have to do to take full advantage of this type of grip.

The Eastern forehand grip is great if you want to hit the ball hard and flat. It also gives you a lot of freedom to switch between forehand to volleys and back. As we mentioned, Roger Federer uses this grip a lot, but his version is slightly modified. This leads us to the disadvantages.

The reason pro players will slightly modify this grip is that it tends to cause a lot of stress on the wrist in the long run. It is comfortable in the beginning, and it does provide a lot of power, but it can get tiring. 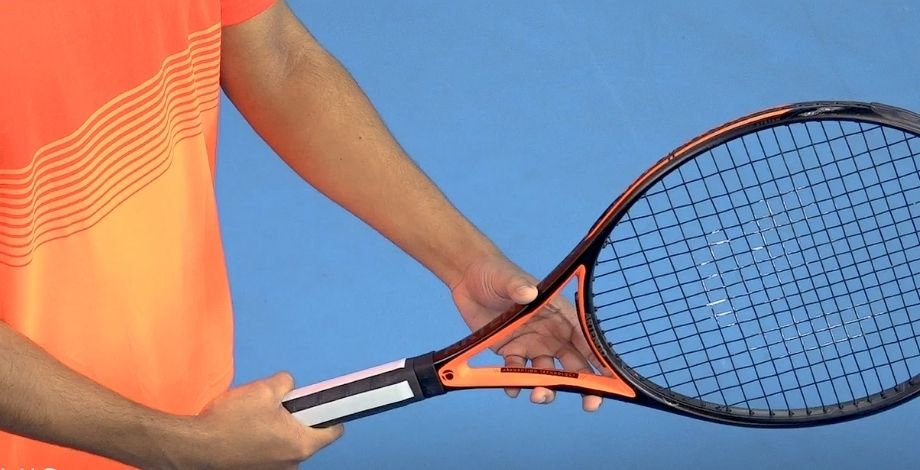 How to Use the Semi-Western Forehand Grip?

Remember the tennis racket bevels? Let’s use them again. The bevel that you’re going to be looking at with this one is number 4. Your index knuckle, or the base of your index finger, should be precisely on this bevel of the racket. It only takes turning the racket one bevel to stop using the Eastern and practice this forehand grip.

This grip is relatively easy to learn, making it great for beginners. It’s also quite useful for pros as well, thanks to the powerful benefits it provides. This includes hitting the ball with more topspin, making it harder for your opponent to return the ball. It proves useful for returning both medium and high balls as well.

When it comes to low balls, the Semi-Western won’t be your best friend. This grip also makes it difficult for switching to volley, making it especially useless for players who like to move closer to the net. 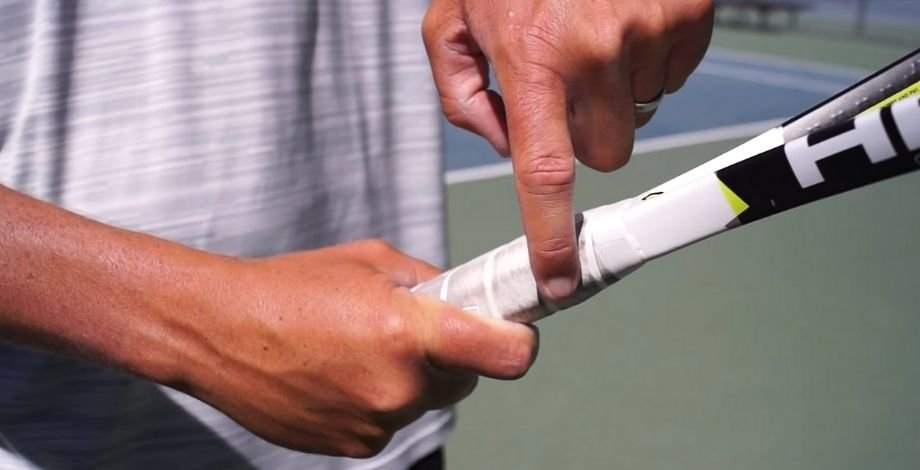 The Full Western grip is a powerful one that can definitely score more than enough winning points. But first, you need to practice using it until it feels completely comfortable. This grip is amazing when you want to slam the tennis ball with a lot of power. Because it offers the ability to apply a lot of topspin to the ball, you can just let loose knowing that it won’t leave the tennis court. Just make sure you have high-quality tennis racket grips and overgrips so that the racket doesn’t fly away with the ball.

How to Use the Full Western Forehand Grip?

This one might feel less comfortable when you first try it out. It takes another adjustment based on the bevels. This time, focus on bevel #5. The process is simple and almost the same as with the previous techniques. Simply open your palm and place the racket in your hand so that bevel number 5 will be laying on top of your index knuckle. After you place it, simply grip the handle and it should feel comfortable while holding it.

One of the main benefits that will come from using this grip is when you wish to generate a lot of topspin. This will allow you to hit the ball much harder and still ensure that it doesn’t leave the court. So, if you’re playing against an opponent who easily returns the ball with the other grips, this one will surely make it harder for them once you’ve practiced enough with it.

The Western forehand grip can take away as much as it can give. For instance, using this grip will make it very hard to switch comfortably to any other grip required for volleys or slice shots. On top of that, you will need a miracle to hit extremely low balls with this forehand grip.

When to Use Each Forehand Grip 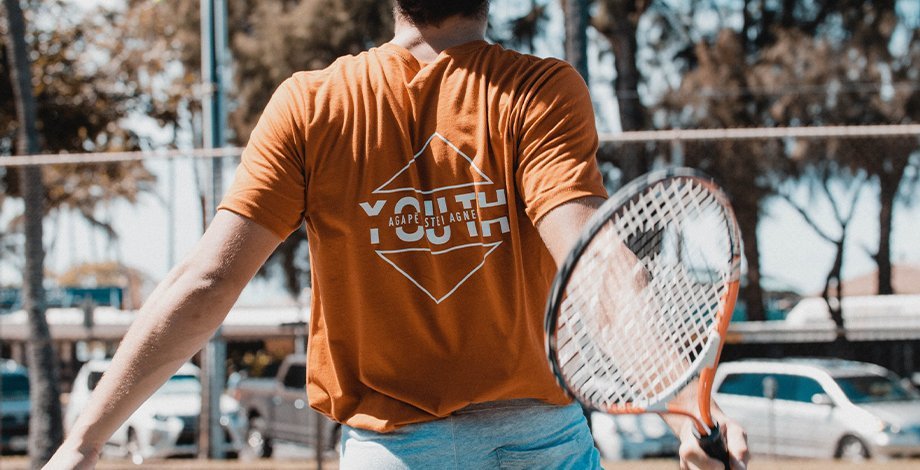 Learning how to use each of these grips is one thing, but knowing when to use them and how to choose between the three is another. The first thing it comes down to is comfort. The benefits of these forehand grips won’t matter if the racket isn’t comfortable in your hand and if it’s causing pain. It won’t even matter if you have the best tennis racket in the world, as long as you don’t feel comfortable with the grip.

Choosing the best forehand grip for you can definitely make your tennis match a lot more enjoyable and winnable. Things to keep in mind when practicing with each of these grips include being comfortable with them. Don’t focus on the benefits they offer at the start, focus on what feels most comfortable in your hand.